Los Angeles Master Chorale: Lagrime di San Pietro
Friday, May 31, 2019 | 7:30 pm
Lensic Performing Arts Center
211 W San Francisco St., Santa Fe, NM
The Los Angeles Master Chorale‘s “extraordinary” (Opera News) rendition of Orlando di Lasso’s Lagrime di San Pietro (Tears of St. Peter) has its origins right here in Santa Fe. “The genesis of this project began in 2011 when [director Peter Sellars] and I were working together on Vivaldi’s Griselda at the Santa Fe Opera,” says Los Angeles Master Chorale Artistic Director Grant Gershon. “I’ve always been especially moved by the way that he guides singers to connect their deepest and most complex emotions to the music.” Sellars, who had never heard the work before, delved deeply into Lagrime di San Pietro, a set of 20 madrigals (a capella works in the vernacular) plus a concluding motet (an a capella work set to sacred Latin text). “[Peter] immediately told me that if we were to embark on this, it would be the most difficult undertaking that he’d ever attempted.”
Born in 1532 in present-day Belgium, Orlando di Lasso took full advantage of what the High Renaissance had to offer. The recently-invented printing press quickly spread his vast published output across Europe, and he was in demand as a composer and teacher from his early twenties onward. Additionally, the international cross-pollination common at the time allowed him to work in courts in Italy, as well as possibly France and England, before settling at the court of the Duke of Bavaria in Munich. During his forty years in service to the Duke, di Lasso had the freedom to make frequent visits to Italy and Vienna to learn about the latest developments in musical style, allowing him to cement his reputation as a composer of the finest quality. Indeed, the reason for his relative obscurity in the 21st century is mostly historical – shortly after his death, Claudio Monteverdi would lead Western classical music down other paths, namely Baroque styles and the development of opera. 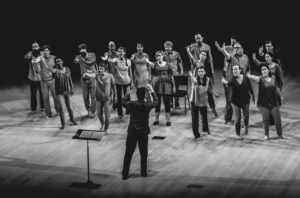 By the time that di Lasso began to compose Lagrime di San Pietro in 1593, his health was failing (to the point where he wrote madrigals to his court-assigned physician), his employers were running out of money, and the Renaissance was long over. According to director Peter Sellars, “Orlando di Lasso wrote [Lagrime] very, very personally. It takes him right to the end of his life. The last five numbers are asking God to let him die and are all about how unbearable old age is.” Di Lasso completed the score and dedicated it to Pope Clement VIII on May 24, 1594. That dedication reads, in part, “these tears of Saint Peter…have been clothed in harmony by me for my personal devotion in my burdensome old age.” Three weeks later, on 14 June, di Lasso died, on the very day that the court decided to discharge him for economic reasons.
The composer relied on his Catholic faith to inspire Lagrime di San Pietro, utilizing the uncommon “spiritual madrigal” format to declaim the text. Specifically, he obsessively focused on the moment, just before Jesus is taken to Pontius Pilate, when Peter realizes he has denied Jesus three times. “Peter thought that he would save himself from all the spears and arrows of the cops that were coming to arrest Jesus. Instead, he’s filled with the spears and arrows of his own conscience – and far more wounded,” says Sellars “The piece is an hour and 20 minutes of seven-part harmony, 21 singers – a community – talking about Peter seeing that look Jesus gave him, for the rest of his life.” This highly emotional moment has inspired other musical and artistic works, most famously Bach’s Erbarme Dich, found in the St. Matthew Passion. The text of Lagrime’s twenty madrigals is taken from a volume sacred poetry by di Lasso’s contemporary Luigi Tansillo, also titled Lagrime di San Pietro. Tansillo died before managing to complete this epic work, but the extant Lagrime is a collection of eight-line stanzas in ottava rima (the rhyme scheme ABABABCC). In his poems, which focus on the elderly Peter trying to come to terms with his actions, Tansillo boldly likened the look between Jesus and Peter to the visual communication shared by lovers – perhaps one of the reasons that Tansillo’s works were banned for a time by the Vatican. The austere motet that concludes Lagrime comes from another source entirely – the 13th-century French poet Philippe de Grève – and represents ​the viewpoint of Jesus himself. 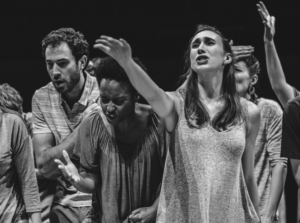 Lagrime di San Pietro relies heavily on Christian numerology. The sacred numbers three and seven appear throughout the piece – in its 21 sections, 7 voice parts, and 7 church modes (a type of musical key). Specifically, one of the Virgin Mary’s many titles is “Mother of the seven sorrows,” meaning that seven was a well-known symbol for suffering among Catholics at the time. According to Sellars, the work was composed “with an incredible concision, with sheer essence and focus. There’s a harmonic density but at the same time it’s stated as simply as possible, without a single extra note.” At the same time, the 80-minute piece is through-composed, or written without repetition, and contains a great deal of text painting (sculptural use of music to reflect textual details) and dissonances surprising even to 21st-century audiences. Sellars continues: “[di Lasso] wrote this music that is so heart-rending and so personal, and at the same time a kind of summation of what Renaissance music was, in terms of harmonic richness. It’s a masterpiece of a composer at the very peak of his powers, he could do anything…[di] Lasso is one of these people who creates chords that are so dark, that are so tortured, and at the same time that have light gleaming through them. It’s the sense that because you are so broken and so far gone, you’re ready for a total spiritual transformation.” Musical complexity on the scale of Lagrime di San Pietro would not be reattempted in the West until the 20th century.
In the face of these difficulties, director Peter Sellars had an unusual idea: asking the 21 participating members of the Los Angeles Master Chorale (three on each vocal line) to memorize their parts (which are mostly in archaic Italian) in order to allow for dramatic staging. The singers utilized a number of creative strategies, including drawing their own picture books, to accomplish the feat. “What is so great is the scores are gone and people are able to sing in different directions. People are able to move as they’re singing a line, so you’re hearing all this harmonic stuff explored in space, which is just wild. Voices coming and going, people turning their backs singing to the floor or singing up, and so all of this kind of wild avant-garde music is moving in all directions,” says Sellars. “This music is such a physical act. What it takes to sing it is so incredible, and what it takes to blend the voices and create these incredible chords, it is such a physical feat…every movement stems from a word, and the emotion that the word evokes. The entire process of the singers ‘memorizing’ this work is really not memorizing so much as digging into their own personal emotional connection with every line of text.” The Master Chorale shattered its own rehearsal record to prepare Lagrime, which took an unheard-of twenty-six rehearsals to learn and stage. According to Gershon, “The counterpoint is very intricate and meticulous, particularly with di Lasso at the end of his life, and everything is so brilliantly, flawlessly crafted that one false move would turn it into a house of cards and the whole thing would come crashing down.”
Since premiering to sold-out audiences at LA’s Walt Disney Theater in October of 2016, the LAMC has performed Lagrime di San Pietro on three continents, including shows at The Barbican in London, the Palacio de Bellas Artes in Mexico City, and the Ravinia Festival. This beautiful and cathartic evening, presented by Performance Santa Fe, is not to be missed.
photos by Tao Ruspoli & Marie Noorbergen